Short reviews of older and newer movies I have watched. Most will likely contain spoilers.

Images posted are not owned by me unless otherwise stated.

Johnny Grissom is a rebellious high school student who is murdered. He returns from the grave to seek revenge.

This movie has been on my Tubi TV queue for some time, and I finally got around to watching it last week.

Going into it, I knew it was a horror-comedy as well as a low-budget film. I’ve watched some horror-comedies that I’ve liked and I have seen some amazing low-budget films. That being said, I suppose my expectations for this film perhaps were a little high. I wasn’t expecting an award-winning film but at least one that I would thoroughly enjoy.

I don’t like giving bad reviews of anything. Books, movies, games, etc. Being a creative person myself, I can still respect the art even if I don’t like it.

Johnny Gruesome, however, just rubbed me the wrong way. It’s just a bad movie in every way. The story, characters, dialogue. Just everything. And I hate having to say that. I truly thought it would be a fun and bloody horror movie. It just wasn’t. It was more irritating than anything if I’m being completely honest.

Nearly a year later, they are still looking for him. They begin to see and hear him reaching out to them.

I watched this movie shortly after it was released to DVD in 2015. I remember liking it and decided to revisit it.

On my second viewing, I have to say I loved it. I didn’t find it scary but not many horror movies scare me.

I love that it was set during Halloween. And the movie definitely has a very spooky/creep feel to it. And I love it.

Although I don’t know how accurate any of it was, the Celtic stuff in the movie was pretty cool as well.

If you like Halloween and horror, I think you will enjoy this movie.

Blinded by the Light is a coming-of-age story about a Muslim teenager named Javed. He likes rock music, which his father disapproves of.

Javed’s life is changed after discovering the music of Bruce Springsteen.

The movie based on a memoir by journalist Sarfraz Manzoor. And directed by Gurinder Chadha, known for the film Bend It Like Beckham.

While the film centers around the main character’s love of Bruce Springsteen’s music, you don’t have to be a Springsteen fan to enjoy this film.

I, myself, am not a fan of Bruce Springsteen. But I love music. And if you have an artist who speaks to you and you connect with their music, you will appreciate this film.

I feel this is a film for music lovers. It’s about the power of music and how personal it is to each one of us.

While for a time Javed tries to emulate Springsteen, he eventually comes into his own. He is not Bruce Springsteen. He is Javed and his life was changed by the impact of Springsteen’s music.

I think we all who music try to emulate those artists who we feel a connection with. I know I did. I’ve been a huge Spice Girls fan since I was 7. I wanted to be a Spice Girl. I wanted to be like Scary Spice. Eventually, I came into my own. I still love music because of them and I’m still a fan.

I have more than one artist that I love and feel a connection with. Music is a huge part of my life. Music is amazing and the impact it can have on a person is powerful.

I really loved this movie.

This is not just a film for Springsteen fans. This is a film for music lovers.

Stan & Ollie is a biographical comedy-drama about the comedy duo Laurel & Hardy.

Rather than being set during the heyday of their career; it is set during its decline and focus on the personal relationship between Stanley and Ollie.

I have watched Laurel and Stan movies since I was a child. My favorite would have to be March of the Wooden Soldiers. When I found out there was a biography about them, I just had to watch it.

It is a funny but also very emotional movie. A bit heartbreaking as well as heartwarming. They may not have always gotten along but they did care about each other. Stanley retired after Ollie’s passing because he refused to work with anyone else but Ollie.

Parts made me sad but there were also some very sweet parts in the movie as well.

The film stars John C. Reilly as Ollie and Steve Coogan as Stan. Both actors were magnificent. I cannot praise their performances enough. They were absolutely wonderful as Stan and Ollie.

I highly recommend this movie. It was great.

Double, Double, Toil and Trouble is a made-for-TV Halloween movie that aired in 1993. It stars Mary-Kate and Ashley Olsen as sisters who discover their great-aunt was trapped and cursed by her evil twin sister.

It’s currently available to watch on Hulu. Or I recently saw Amazon is selling this on DVD again.

This movie along with To Grandmother’s House We Go are my favorite films that star the Olsen twins during their heyday. And as an adult, I still very much enjoy these two movies.

Double, Double, Toil and Trouble is a fun family movie. It’s not scary or even spooky but still captures the Halloween spirit well. The film also stars Phil Fondacaro as Oscar. He is a great actor, in my opinion.

And a young Eric McCormack plays the father in this film. He is best known for Will & Grace.

This is a film that I will forever love. It’s fun and Halloween-themed! If you haven’t watched it, I recommend checking it out. It is worth a watch.

An animated film with its own take on the origin of Santa Claus.

It follows a postman who is stationed in the North and eventually befriends a toy-maker.

The movie has some typical things I have seen in other films; a spoiled main character, adults holding grudges and not acting…Well, very adult, and other characters finding out the main character’s original motive and being upset although the main character has now very much changed.

This, however, does not make Klaus a bad movie. Perhaps a bit irritating at times but I found the movie to be very sweet. And pretty funny at times. I found myself smiling throughout the film.

It’s definitely an interesting take on Santa Claus’s origin story. A fun movie with heartwarming moments. It’s worth a watch.

I absolutely loved this movie as a child and remember watching it more times than I can count. I have only watched it a few times in my adult life and that is due to the fact I never owned this on VHS or DVD. I watched it on TV as a child but as an adult, I rarely ever saw it on. At least when I had cable, anyway.

It was quite a few years ago I had watched this last until I signed up for Disney+.

This one is darker than The Wizard of Oz, I suppose. At least that’s how others describe it. Darker and even a little terrifying, especially for its target audience.

As a child, I was never frightened by this movie. And as an adult, I can see how it is darker than the original. But it’s still wonderful, still very much fantasy with a cast of unique characters that are very easy to love. The villains in this have no flying monkeys but the one might want your head if you’re a pretty young girl. And the other is responsible for Oz being in such ruin and the Scarecrow being missing.

After my recent watch of this, I find I still love this movie very much and think I like it even better than The Wizard of Oz.

Perhaps it’s the darker atmosphere that appeals to me more. Or it could be the characters. They felt more….Real? I’m not sure how else to describe it.

This is a movie I will always love. It is forever a favorite. 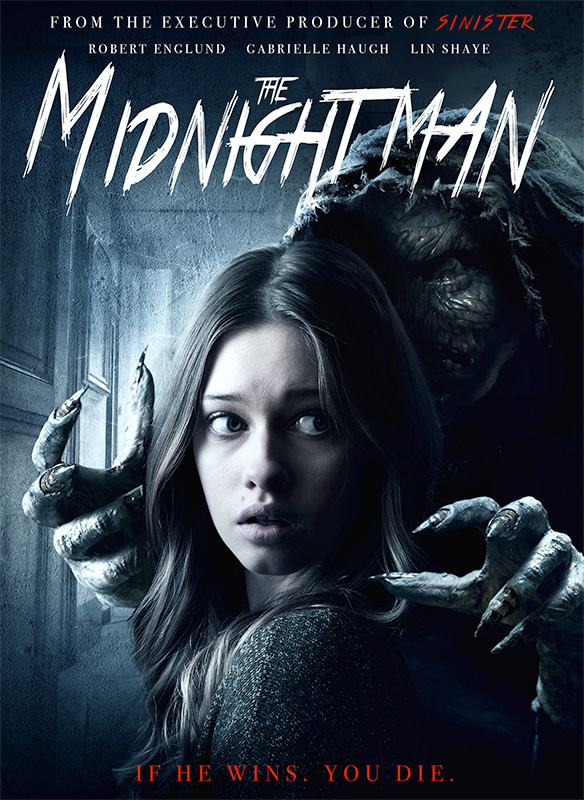 In 1953 three children are playing a game that begins at midnight and ends at 3:33am. They must avoid The Midnight Man who feeds on their fear and eventually kills them.

Jumping to 2016, Anna the girl who survived is now a grandmother and has been diagnosed with dementia. She still lives in the house where the game took place and she is cared for by her granddaughter Alex.

One night Alex’s friend comes over and they discover the game.

I love horror movies but I think that it is tough to find an actually good horror movie. I’ve watched many; some I love very much, others were just okay, and some were just plain bad.

But I am always looking for the next horror movie that may surprise me.

And I’m happy to say that The Midnight Man did just that.

There are familiar faces in this movie such as Robert Englund.

The acting was good and the Midnight Man himself is definitely creepy. Gory as well. Six minutes in and someone already died.

This sort of movie has already been done; a creature feeding on people’s fears. But I feel The Midnight Man is much better than similar movies such as The Bye Bye Man.

Horror movies don’t scare me but this movie definitely has the creepy factor going for it. It was well done and I actually loved this movie. It would be one I’d watch again.

A couple rents out the cottage behind their home to a romance novelist Robert Mars ( played by David Arquette ) and soon regret their decision once they begin noticing odd things about him.

Some may not think David Arquette is the best actor but I’ve enjoyed the few movies I’ve seen him in. They were comedies though. The Cottage, however, is meant to be a serious horror movie.

Arquette’s acting wasn’t the best in this movie. And I can’t say the other actors were much better.

In the end, it did have me saying, “Damn. That’s crazy!” And some of it definitely was crazy. Somehow Robert seemed to be brainwashing teenage girls into being his wives and killing. His newest wife kills her own father and so I assume he had his other wives do the same to their families.

So, yeah. All of that was definitely crazy. But I don’t understand how Robert was trusted to begin with. Right from the beginning, he seemed shady as hell.

Not a bad movie. It had some things going for it but overall, it could have been much better.